MUNICH, GERMANY-Originally built as a castle in 1385, the iconic Munich Residence, the largest city palace in Germany, was the seat of government and the residence of the dukes, electors and kings of Bavaria from 1508 to 1918. Today the site is open to visitors as l one of the most famous museums in Europe, with a complex comprising 10 courtyards and 130 rooms as well as collections of art dating from the Renaissance.

Thus, the place has created an unconventional and unforgettable setting for a recent unique concert of its kind. Bmw, featuring world-renowned composer Hans Zimmer and the Munich Symphony Orchestra in an immersive and experiential environment mixing art, lighting and sound. During the event, famous composer Hans Zimmer was joined on stage by his world group with the Munich Symphony Orchestra for a 90-minute ensemble of some of his greatest hits.Photo: BDX Media

Re: Imagine Music concert was part of BMW’s presence at this year’s show IAA Mobility Summit, which took place in Munich from September 7 to 12. The brand adopted an overall Re: Imagine Today theme for its presence at the show, using a variety of experiences to offer in-depth looks at how the future of mobility can be, you guessed it, reinvented. .

Zimmer was a fitting choice to represent BMW at the rally; he first collaborated with the brand in 2017 on its award-winning “Road to Coachella” campaign, and in 2019 became the official composer of BMW IconicSounds Electric, an ongoing initiative that will add Zimmer-branded start / stop sounds to BMW’s next electric vehicles. .

The concept of electric vehicles was the theme of the evening concert. “Hans composes all of the sounds for our electric cars, so we decided to give this show an electric vibe as well,” explained Dr Alexander Kotouc, BMW Group Experiential Marketing Manager, adding that some of the musicians on stage were even playing. electric. instruments to enhance the sound quality. “We wanted this show to happen to celebrate our partnership, but most of all we wanted to bring joy to the visitors and create an incredible memory for everyone who was there.” 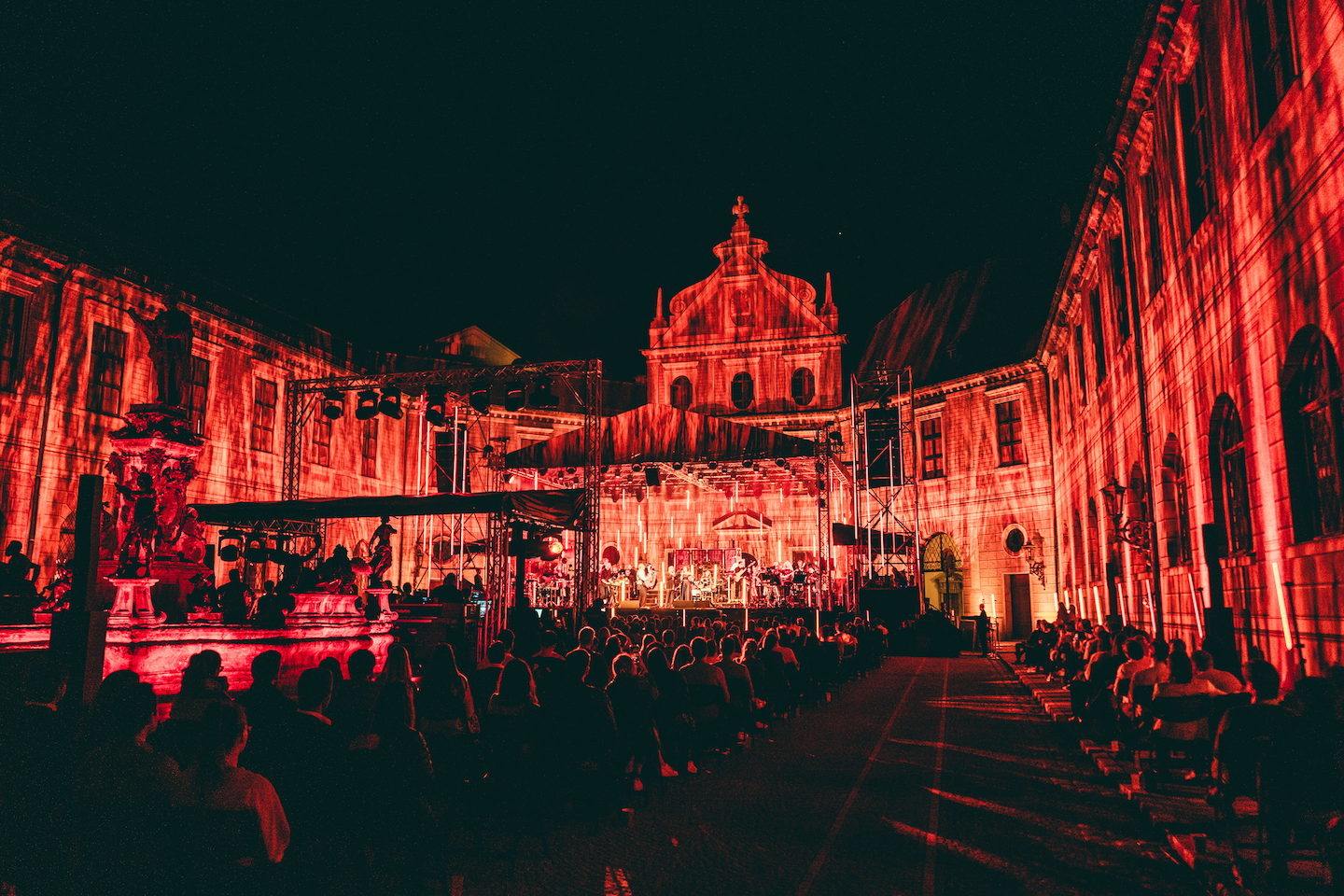 The event was produced and organized by the BMW Experiential Agency Mirrored media, which manages the IconicSounds Electric project with BMW and Zimmer. Mirrored Media worked alongside Global RCI and local agencies, including Pacific entertainment, Semmel concerts and Tomek Productions to produce the show. The courtyard setting was intentionally chosen to reflect the 360-degree experience of listening to music in a vehicle.Photo: BDX Media“Our overriding goal was to create a unique, joyful and memorable musical experience for the lucky guests of the IAA in Munich,” said Justin Lefkovitch, Founder and CEO of Mirrored Media. “We organized and designed the show to communicate the message of partnership around the endless opportunities and possibilities of electrification.

To completely transform the historic space, specially designed speakers and lighting took advantage of the courtyard’s perimeter walls, allowing for high-quality immersive sound and a unique light show programmed to the music.

The courtyard setting was intentionally chosen to reflect the 360-degree experience of listening to music in a vehicle. “The beautiful venue in the middle of a lavish courtyard gave us a one-of-a-kind sound experience to work with,” noted Nils Montan, Director of Event Marketing at Mirrored Media, adding that sustainability was also a goal to be linked to. concept of electric vehicles. “Following the general themes of the IAA, we designed the experience to use limited power and generate limited noise pollution while providing listeners with an immersive listening experience. “

To bring the power of electricity to life, Montan added, the team organized a 360-degree projection and lighting experience that went hand in hand with the audio experience. “So no matter where you were in space, you felt the magic of the music and the lighting,” he explained. “We had the privilege of making this century-old palace our own canvas. Inspired by the juxtaposition of a classic space with modern amenities, we brought a modern musical experience to life in a classically ornate setting. 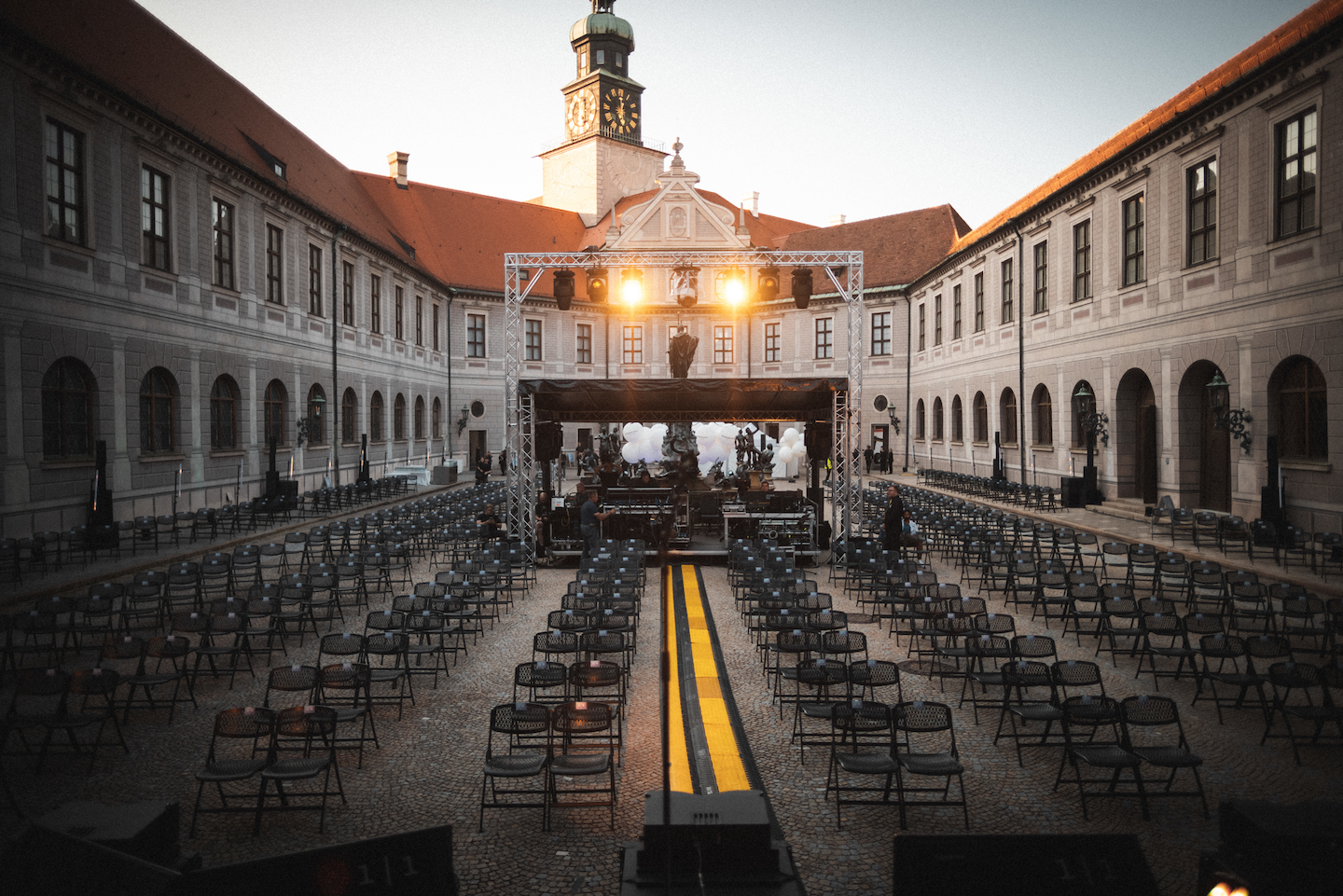 “We were working in a fragile environment, literally,” said Nils Montan, director of event marketing for Mirrored Media, of the centuries-old venue.Photo: BDX Media

Of course, hosting a tech event in a centuries-old outdoor space was not without its challenges. In addition to COVID-related protocols and regulations imposed by government, brand and location, the team “was working in a fragile environment, literally,” Montan said. “The place was a historic castle… and is still a working museum, so we had to be aware of the space and the area around it.”

Another challenge? A very tight schedule: The event was organized and produced by teams based in Los Angeles and Munich in just under a month, with staff members often working in the middle of the night to account for the jet lag nine o’clock.

But the effort was worth it, Lefkovich said. “The result was an extremely moving spectacle for many of the participants. As the first show that many people have seen in almost two years, people have been overwhelmed by the thrill of the sound, music, lights and the overall power of the show, ”he said. . 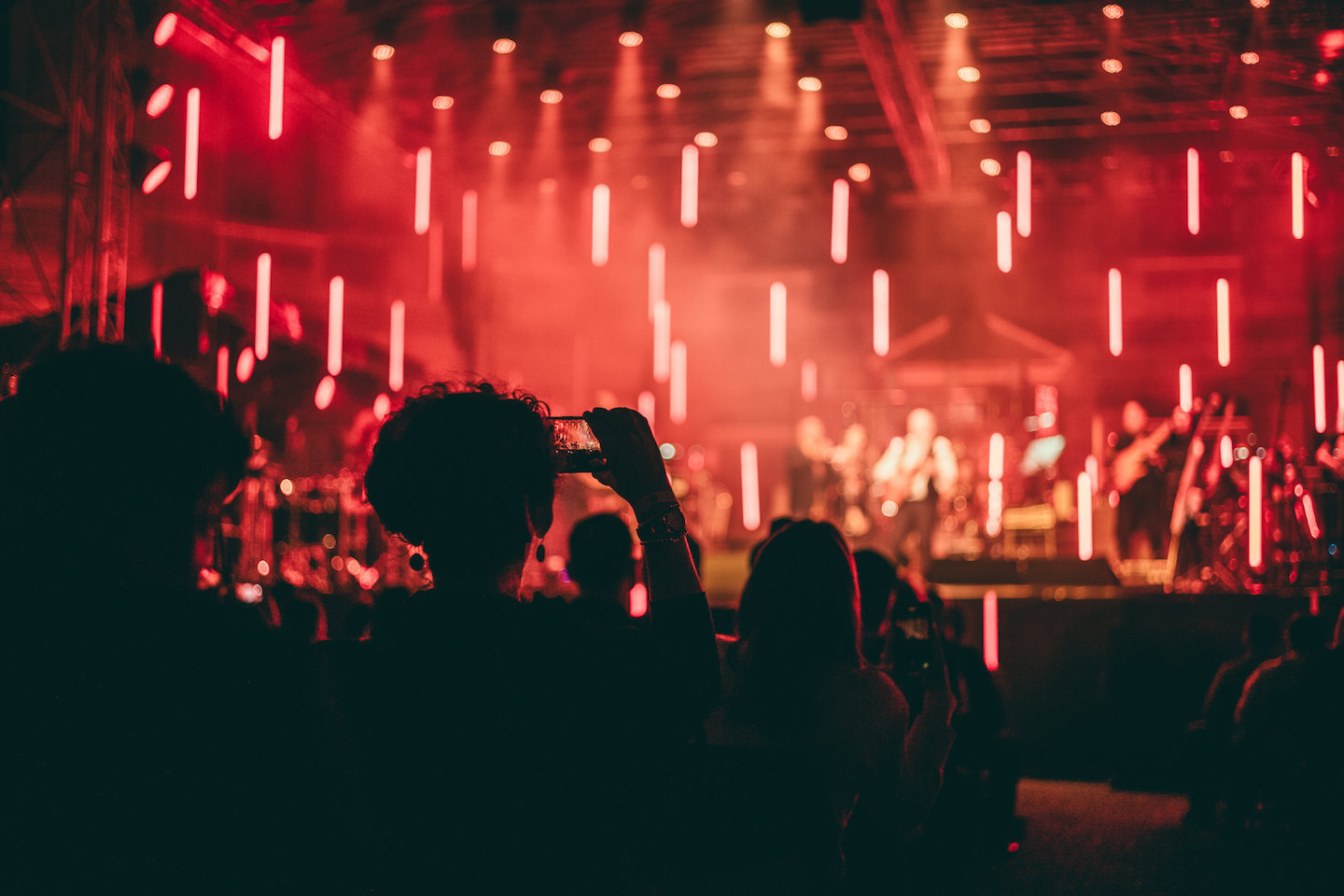 “In order to elevate the experience and approach [the electric] theme, Zimmer inspired his band to bring the power of the electric to life on stage, like Tina Guo on electric cello and Rusanda Panfili on electric violin, through an inspiring setlist of all of Zimmer’s best known and revered songs. », Explained Founder and CEO of Mirrored Media, Justin Lefkovitch.Photo: BDX Media

During the live concert, Zimmer was joined on stage by 30 musicians, who performed for over 90 minutes and covered the composer’s greatest hits, including pieces from Creation, The “Da Vinci Code, Wonder woman and Pirates of the Caribbean. As a surprise callback, singer Lebo M., who performed on the soundtrack of The Lion King, joined Zimmer on stage to perform “Circle of Life”, nodding to the circular themes of BMW messaging

“BMW is a brand of love, with all of our DNA we want to bring joy to people,” said Stefan Ponikva, vice president of brand communication and brand experience at BMW Group. “Especially after this long period of pandemic, during which physical events were not possible, we wanted to give Munich residents a very special and moving experience during the IAA Mobility. A moment of goosebumps!”

He added: “So connecting a very traditional and centered place like the Brunnenhof with such a modern projection mapping and immersive surround sound seemed perfect to us.” 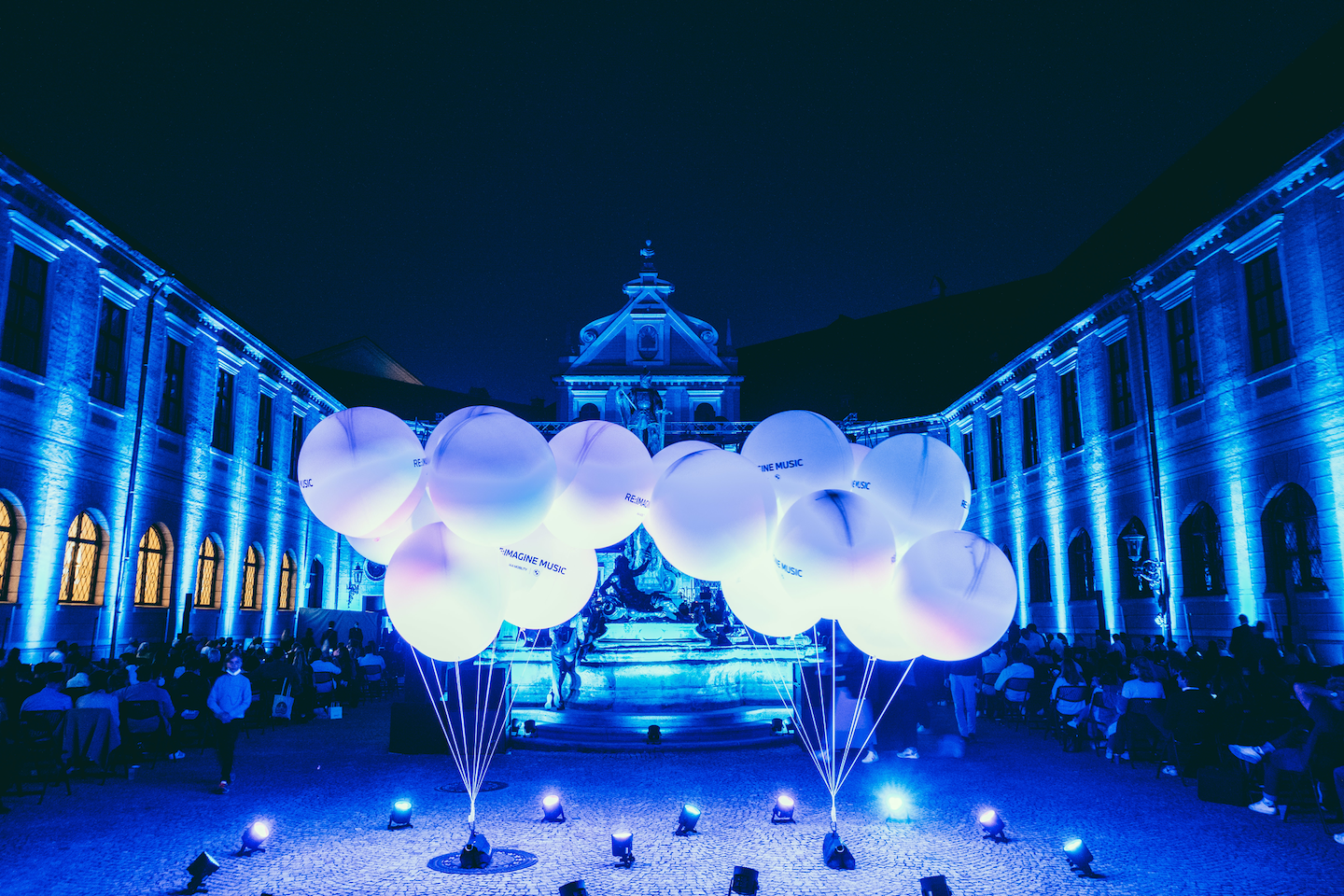 The event had a Re: Imagine Music theme, linked to the brand’s overall presence at the IAA Summit of Re: Imagine Today.Photo: BDX Media